I have always been fascinated by little houses. I mean, little bitty houses, teeny tiny houses, like doll houses and bird houses. That’s why I acquired my first doll house when I was almost 60 years old, after waiting so many years hoping someone would give me one. 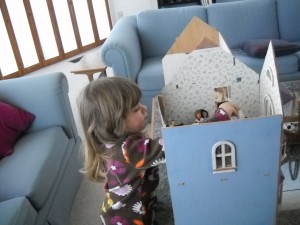 Mine was a kit from a catalog, an impulsive sale, and I was so excited when it arrived that I immediately began to put it together without reading the instructions first. So I skipped some important details, like priming, painting and papering the walls before building rooms. I started by installing the windows and then put the walls together, and yes, the eventual painting and wallpapering were much more difficult tasks than they should have been. But finally I had my doll house, and Don paid way too much for a Victorian family 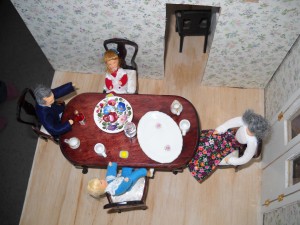 The dollhouse family at tea in their dining room

of four–mommy, daddy, girl child, boy child–to live in it. Then my granddaughter Nina came over to see it, and it has been chaos ever since. Nina is not of the hands-off-in-admiration school of doll housing; she hands on plays with it. So now I find the bathroom fixtures all over the house, dinosaurs ensconced snugly in the living room, and the dollhouse family all losing their hair.

Then I discovered another kind of little bitty house. On an urban hike, just through my own neighborhood,  I found a tiny house full of books with a sign on it: “Take a book, leave a book.” I learned that it was part of the Little Free Library Movement, 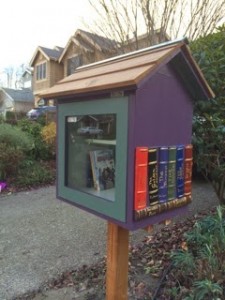 whose mission is to promote literacy and love of reading. I found another little library a few blocks away and a third near my son’s house in Seattle’s Queen Anne neighborhood. In Parade Magazine of November 17, 2013, I read this about Little Free Libraries  “The movement started in Hudson, Wis., where Todd Bol mounted a wooden box filled with books outside his home. Today there are more than 10,000 ‘little free libraries’ worldwide. To buy or build your own, go to littlefreelibrary.org.”

You might think now that I am going to establish a little library in my own yard, but I already have a little bitty house there. On an Elderhostel trip to Thailand in 1997, I first learned about “Spirit Houses.” These tiny, very elaborate structures sit outside a house or business establishment to provide a home for evil spirits who might otherwise move into the  main building. Residents leave food, drinks and flowers to keep the spirits happy. I didn’t realize that I wanted a spirit house until after we came home, and I began to notice them outside of Thai restaurants. When our first OAT (Overseas Adventure Travel) trip in 2006, to Vietnam,  offered a “pre-trip” to Bangkok, I decided to look for a spirit house of my own. In my journal of January 16, 2006, I described taking “a tuk-tuk to Silom Village, a real tourist event! Rows and rows of tables, all the tourists fed the same menu, beautifully presented in individual plates. Then after the show, we bought a spirit house.” The next day we re-wrapped the package so it was less bulky, and I shlepped that spirit house all over Vietnam and Cambodia until we finally got it home on February 3rd.

The sales person assured me that my spirit house would stand up to all kinds of weather. 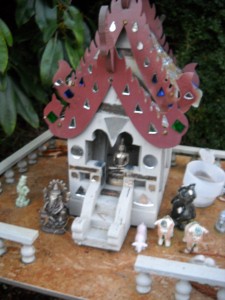 She had never lived in Seattle. After one winter, the composition material was beginning to deteriorate. We knew it wouldn’t last long. Don took the little house down to his workshop, took it apart, carefully saved the glittery decor on the outside, and copied the pieces in marine plywood. Then he glued it back together, coated it with waterproof paint, and glued all the glitter back in place. Back on its stand, it has a Krishna figure and a Ganesh, the elephant god, to protect it. Surrounding the house are figures that have been given to me or those found in tea boxes. I see it every time I come home to or leave my big house, and no evil spirits are living there.