On Fridays, our five-year-old Byron attends Wilderness Adventure School somewhere beyond Duvall. Last week, Don and I were invited to their Grandparents’ Day. In order to get to school at ten on Friday morning, we left our home in Seattle at four Thursday afternoon to drive to Byron’s home in Redmond. First we had to pack for the next day: sandwiches, snacks, water bottles, long underwear, rain pants, two hats–one for sun and one for rain– extra warm layers, and of course our pajamas and toothbrushes. We had dinner with the family and spent a warm night on the guest futon.

With Byron on our way out of the woods. Nina came to greet us.

Next morning we were up and warmly dressed, our backpacks full, ready to be driven to the Wilderness School. We drove and drove and drove, up, up and up. Finally we arrived at a parking lot with three Sanicans. Marisa and Nina accompanied us on a gravel walk through thick woods to a big tepee; then they left Byron, Don and me and went off to their own adventure.

There was a fire burning in the center of the tepee, most of the smoke rising to the hole at the top but some dispersing over the grandparents. A bench ran all the way around with the children’s names pinned to the back. Byron found his name immediately, left his backpack there, and sat down on a log near the fire. For the rest of the morning he more or less ignored Don and me, which was as it should be. We listened to the songs and stories, followed along outside when it was outside time, and watched games of “Tag” and “Run Rabbit Run.” There was a time to drink water–Byron said, “To stay hydrated”–and a time for snacks. When the children moved around outside, they formed a “snake,” one teacher at the head of the line of children and one at the tail, with the grandparents straggling along behind. We had gone deep into the woods when it was lunch time. We had our packs with us, so we sat on a log that turned out to be a very wet log to eat our sandwiches. There were big trees in the woods and big stumps that showed that the land had been logged off long ago. The undergrowth was very thick. A five-year-old walking through could disappear very quickly. I was concerned that a child could be lost but the staff watched very carefully and didn’t let that happen. (There was one staff person for every four kids.)

Back in the tepee–by this time four hours of sitting outside on logs had gone by and I was wearing all my warm layers–we had a leaving ceremony and signed Byron out.  Marisa and Nina met us on the path up from the parking lot.

With a day in between, we had our next grandparents (lower case g) day on Sunday. In the morning I made the dough for Cherry Winks (a cookie made with dates, pecans, and Maraschino cherries) and put it in the fridge to chill. After Sunday school, Marisa, Byron and Nina, Uncle Jeff and Aunt Judith, came to our house for lunch. We had bagel pizza: bagels sliced in half, tomato sauce from a tube squeezed over the cut side, turkey pepperoni and Mozzarella cheese layered on top, and all toasted in the toaster oven. While Nina went to the playground with her mom, Byron and I made cookies. We used a big rolling pin to crush two cups of corn flakes into smaller pieces. Then we scooped balls of chilled dough and rolled them in the corn flake crumbs. Some of the corn flakes fell on the floor. We put the balls on a buttered baking sheet, I put a quarter of a Maraschino cherry on each ball, and Byron used a plastic cup to push down each ball and make it flat. We did a whole sheet of cookies that way and put them in the oven.

When Nina came back from the playground, Byron went downstairs to play with Grampa’s machines, and Nina had her turn to make cookies. She filled two baking sheets with balls of dough rolled in corn flake crumbs. I did the cherries. We baked three sheets of cookies all together. I should have counted to see how many cookies we had, but I was so busy removing the hot cookies from the baking sheets to a platter, I forgot to count. While I was washing the baking sheets, Aunt Judith swept up all the corn flakes that had fallen on the floor.

Our cookies look almost exactly like the cookies pictured in the book, except that some of the cherry pieces didn’t stay in the exact middle of the cookies. We packed a small tin of cookies to give to Daddy when he came home from Orcas Island, and we went out to Blue C Sushi. 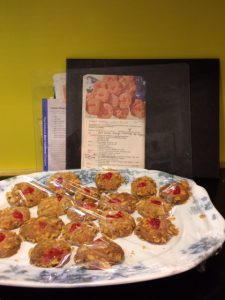 Appendix: How to play Run Rabbit Run. One player is the coyote; he or she stands in the middle of the circle. All the other players are rabbits, standing in three safe zones around the circle. When the coyote yells, “Run Rabbits Run,” all the rabbits have to leave their safe zones and find a different safe zone. Any rabbit who gets touched by the coyote gets to become a coyote and stand in the middle with him/her. Gradually all the rabbits will be touched, and someone else gets to be the coyote, so you start over again. When Byron played he was the first rabbit to become a coyote, and after that he ran around, yelling and touching everyone, mostly the other coyotes. It was great fun.