My Favorite Hat, the Sequel Hat, from Durango, CO

For many years, I had a Sequel brand hat, a wonderful hat, made in the USA–actually, I owned two of the same model. The first one had a mesh body with a round foil patch on the crown to reflect the sun from my head, and a stiff solid bill lined with black, so the sun wouldn’t be reflected on my face. A cotton knit shawl or scarf attached with Velcro covered the back of my neck to keep the sun off when it was hot, and wrapped around the front when it was cold. When I wore that hat on a raft trip down the Grand Canyon, the red soil in the Colorado River turned it pink and it wouldn’t wash clean, but I wore that hat until the foil crumbled away and the Velcro stopped holding. Then I bought myself a new Sequel hat, startlingly white, with a rectangular foil patch and an adjustable chin strap, but with the same mesh body and soft scarf. I loved those hats! When the foil in the second hat began to peel away, I went shopping for the third one, but no luck! The manufacturer’s web site said he was closing up shop. He was going hiking! No more Sequel hats. I tried other hats, but none really worked. When I visited Machu Picchu, I saw a woman wearing a Sequel hat, and I tried to buy it from her, but she refused. What a disappointment. Then I saw a friend wearing a billed hat with a bandanna handkerchief pinned on with little safety pins all around the bottom. I thought, I could do that! 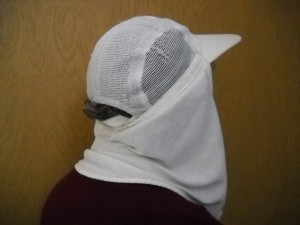 I found a mesh hat. That was easy. It wasn’t made in the USA, it isn’t white, it’s tan, and it has a solid crown, no foil, but the bill is lined with black. Then I had to find a bandanna that would match it, and that wasn’t easy. I brought home lots of bandannas (I can always use another bandanna, that’s a topic for another post), and that became the project for my travels in the summer of 2009, to stop at every shop that carried bandannas to try to find one that was tan. Bandannas come in every color and eventually I found the right one. Then I had to try to attach it. I wanted to put Velcro on the hat and on the bandanna so I could separate or attach them easily. I asked my dear friend J.K. for advice before I cut the bandanna, and she took hat and bandanna away and came back a week later with the job done. The bandanna is folded in half and has deep pleats that drape around my neck. I pinned a shoe string inside to use as a chin strap. 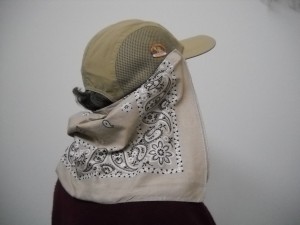 My friend did a wonderful job. Now I have a fake Sequel hat, an adequate, but only adequate, copy of the original. I can’t say that it’s a pale copy, because it’s darker, but if ever I get to Durango, CO, I’m going to find that old factory, haunt the used clothing stores, and find myself another Sequel hat.

23 Responses to My Favorite Hat, the Sequel Hat, from Durango, CO