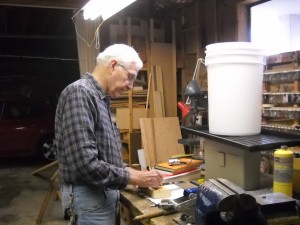 Don working on his cider press

My lovely granddaughter Sarah (the same one you may have read about in my post  of  March 29, 2010, “My Lovely Young Granddaughter, The Star Wars Trooper”) has been making a study of cider, especially hard cider . For several years, she has been tasting ciders, visiting cider festivals, and reading about ciders on the net. Now she has moved into a rented house that has an apple tree, Gravenstein apples, which make good cider, and she decided to make cider herself. She asked my husband Don, her grandfather, to make a cider press for her, but after much study of plans for presses on the web, Don decided that he would design a press himself. (Don is a kind of Rube Goldberg inventor–Rube was a cartoonist who developed complicated plans for doing simple things.) 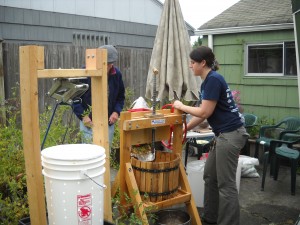 The classic, rented press in use

Last Saturday Don and I and two friends helped pick the apples. Much of it was picking up apples that fell to the ground when Robert, up on a ladder, shook the branches. Tam checked the apples and rejected the ones that had broken skins, which was most of them. On Sunday Sarah washed all the apples and the tubs, etc. that she needed for Monday, her day off, when she had arranged to rent a traditional, classic kind of cider press. Don was not deterred.

On Monday Don and I went to a lumber company, a brew company and an auto parts store to buy the components for his cider press : some long boards, an AC Delco scissors jack, a plastic tray from Storables, and a food-grade plastic tub from Bob’s Homebrew.  He put the thing together in one afternoon. He drilled holes in the tub to hold the apples, which were pressed by a thick circular cutting board pushed down by the scissors jack. We took it to Sarah’s house to try it out. It worked, but it was tippy, and we had to chop up the apples for pressing by hand.

Meanwhile Sarah was pressing out apple juice in the rented press. That press came with a hand-cranked grinder to chop the apples into smaller pieces that could be pressed, but it was hard, slow work. I remembered that in one of the blogs we had read about cider making, someone had said that she used a new garbage disposal to grind the apples.  So Don bought a new Emerson Insinkerator garbage disposal and created an apple grinder to attach to his press. It was 10 p.m. on Monday night when he was finished, so I didn’t get to see the thing working, but Sarah tried it next evening and assured us that it worked. 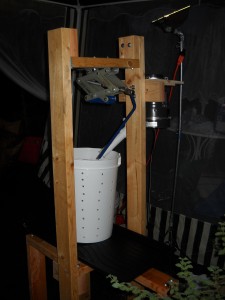 On Thursday evening we went to Sarah’s house to see Don’s press at work. I cut apples into quarters while Don and Sarah pressed. A new problem: the grinder was fast and the apple pieces sufficiently small, but the disposal heated up rapidly and the motor cut off until it cooled. The garbage disposal was designed to be run with cold water from the tap running through it to cool it; when we ground apples, no cold water, therefore no cooling. Sarah was very discouraged. She had a big load of apples and no means of pressing them. Meanwhile,  the used apples, the mash, pressed into a big mass, were attracting fruit flies and yellow jackets, and her compost/recycling bin was full. She called Friday morning before work. She had decided to rent the classic press again on Sunday morning, and finish the job. Don has gone back to the drawing board, convinced that by next season he will have completed an all new, effective system for grinding and pressing apples.

Monday morning report: the job is done! Sarah has five and a half gallons of apple juice, waiting 24-hours for the treatment to destroy natural occurring yeasts to be over. Then she will add a different yeast, to start the juice fermenting. In six months, if all goes well, we’ll have hard cider. The recycle truck came and took the first load of attractive mash away, and the rest of the mash is in the covered bin ready for the next pick up. On Sunday morning, the hand grinding and pressing went very quickly, with Robert, who is very strong, manning the grinder and Sarah on the press. Don’s grinder and press are in our garage, awaiting next season.